Walking Virgo in The Kingston Zodiac – in Beddington

We are starting the first of the star sign walks, and this month is Virgo in the Kingston Zodiac.

Mary Caine discovered the terrestial Zodiac in the landscape centred around Kingston upon Thames. Virgo includes Carshalton, Sutton, Nonsuch Park and Beddington. This year will be walking Virgo in Beddington.

As we walk we will be connecting to the landscape with the intention of healing the Virgo energy both in ourselves and the land.

As well as being a wonderful healing and connection to the land, it is a personal journey for transformation.
We shall harness connections to the Earth spirit in the landscape to gain enlightenment and revelations/synchronicity.

At the start of each walk you will have the option to receive a smudging using North American white sage which will cleanse your energy. Sometimes we may use crystals, meditation or cards to support us on our way.

At various sites we bless and honour the spirit of place, its guardians and the ancestors who sought sanctuary here over many centuries.

Virgo will be a 2 hour walk and we will go for tea/refreshments and chat for those that wish to stay on.

Train stations are served from London, either from Blackfriars (via Mitcham Junction) direct to Hackbridge – with then a 20 minute walk via Beddington Park or to Waddon Station served from London Bridge or Victoria (via West Croydon) with a short bus ride or a 15 minute walk

• The terrain is good at the moment, however please dress in suitable attire, good walking shoes, trainers. Not flip flops!

• The walk will go ahead no matter what the weather conditions are, and bring a bottle of water as we are not always near shops or cafes.

In many ancient cultures, the life force is represented by a deity, most often as an Earth goddess figure.

Virgo does not reveal her age, she may well represent three universal aspects. However, as the sign comes at harvest time in the agrarian calendar at the time of fruitfulness and ripeness of the autumn season the essence is fundamentally as the virgin bride to the land in the rolę as an experienced mother figure, old as the hills and vales but equally forever young, of a caring, protective and motherly disposition.

We are going to walk and gently roam around the zodiacal sign of Virgo. On this occasion specifically in the landscape effigy, we shall skirt the hem as we walk along the bottom edge of Virgo’s flowing gown, on the bank of the meandering stream, named the Wandle, which rises, less than a mile west at Carshalton. The water Wandle which flows into the adjoining parklands. Virgo represents the 6th house of health, so no surprise to find a Wildlife Rescue Centre beyond the Manor House on the edge of the park. 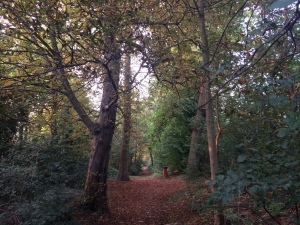 According to a local legend Queen Elizabeth often rode out from Nonsuch Palace (also within the Virgo landscape, where the effigy of the figures head is outlined in the land) to visit and go hunting with her Cornish/Welsh cousins, the Carew’s, and where her horse kicked up a stone in the earth it caused the spring to burst forth, which now forms the large pond in front of the Woodman Public house and Carshalton church on the High Street, (before it becomes the Croydon Road) and started the River Wandle flowing.

Her mother Ann Boleyn is also commemorated at Carshalton Ponds by Anne Boleyn Well there & where her statue recently stood before it was removed for renovation.

It is said king Henry 8th met Ann Boleyn for trysts halfway between her home at Hever Castle and Henry at Richmond/London.

Queen Elizabeth’s Walk runs south of Carew Manor on the other side of the Croydon Road, through a glade of trees, many horse chestnuts, until it comes to an abrupt end at a suburban garden wall in Queenswood Avenue, but once led onwards. If the walk continued it would skirt the boundary of Bandon Hill Cemetery.

There are legends or stories of many culverts and tunnels in the vicinity, which eminate from the Manor House which link to the church and other buildings including The Plough Pub to the west on Plough Lane, an obvious old Green lane, where a modern metal grill with a lock blocks a bricked up archway remains mysteriously at the side of the road.

Other local paths are reputed to be haunted with many testimonies of ghostly figures have been observed including the Grey Lady, particularly the Church Lane going eastwards. 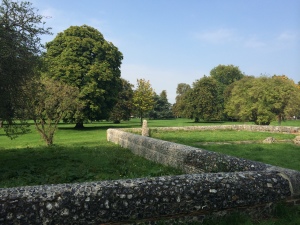 The area of Carew Manor, home to the West Country family of that name since the 14th century is now protected in the centre of a environmental conservation area. The Manor House became a school and has now become an Academy (for children with moderate learning difficulties), children reflect Virgo’s love of learning.

St Mary’s at Beddington along with the graveyard which extends across the service road into the parkland has been on the site for many centuries.

Bedd translates from the welsh for ‘place of graves’ and there were once indeed barrows once in Beddington.

An ancient lead lined grave was discovered when roadworks were in progress.

Roman burials have also been discovered and recorded in the vicinity and a Roman sarcophagus can be found in the church.

Opposite the Carew Manor gates is a wide avenue of horse chestnut trees. Between these was once the entrance avenue through the park up to the Manor house. Later it was changed into a wide canal which can be envisaged by the contours between the rows of trees. This was later filled in by a later owner who constructed many of the buildings and a notable bridge which carry his (initials) monogram.

There is the claim that Sir Walter Raleigh, cousin to the Carews, was released from a lengthy term of imprisonment by King James to attempt one last voyage in a failed search for the treasured Elderado in South America.

When he was executed on his return his head was claimed by his son to be buried in East Horsley, Surrey while his body was supposed to be secretly buried by his cousins here in their vault in Beddington.

Obviously many of the Carew family, of undoubted Celtic ancestors, were buried in St Mary’s, some with evident expensive memorials. The feel inside the church is similar to a smaller version of a cathedral with north and south aisles and with a series of pillars and arches, a tall timbered roof and a novel small chancel, all highly decorated in pre-Raphaelite style along with William Morris who painted the organ.

It may not be possible to visit the interior of the church and is impossible to walk a circuit around it, as it is attached to the Manor wall. However we intend to gain impressions and instill some peace and tranquility.

We have walked the Kingston Zodiac for 2 years and continue to find new connections as we move through to new levels of personal and planetary consciousness. There will be plenty of time to meet like minded people and connect with nature.

The next walk will be into Libra in Kingston: Wednesday 8th October.

“I am the breeze that nurtures all things green. I encourage blossoms to flourish with ripening fruits. I am the rain coming from the dew that courses the grasses to laugh with the Joy of life.” Hildegard of Bingen (16th/17th September: her birth & death respectivley, the day before the walk in Virgo)

Disclaimer: Please note you are responsible for your own well being on this walk and Jo Ward/Anthony Charlton are not anyway liable for you.